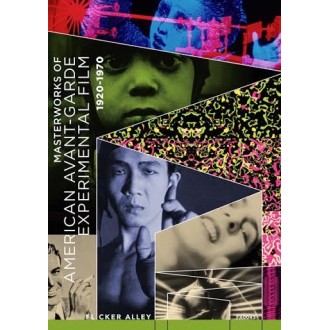 A 4-disc Blu-ray/DVD Combo Edition that includes 37 films, restored to pristine high-definition, from some of the foremost experimental filmmakers of the 20th century.

Flicker Alley and the Blackhawk Films® Collection, in collaboration with Filmmakers Showcase, are proud to present Masterworks of American Avant-garde Experimental Film 1920-1970 in a 4-disc Blu-ray/DVD Combo Edition. This breathtaking collection includes 37 films, restored to pristine high-definition, from some of the foremost experimental filmmakers of the 20th century.

Commencing in 1920 with Charles Sheeler and Paul Strand’s creative collaboration on Manhatta, successive generations of experimental filmmakers and artists have worked in collaboration or alone to create a cinema capable of expressing dynamic unspoken concepts in totally abstract visual terms.

To watch these films is to see the world anew through cinematic interventions: fast cutting, expressive camerawork, abstract animation, surrealistic collage, distorted and superimposed imagery, and many more extraordinary techniques. Essentially the filmmakers ask us to open our eyes and see, to permit the reception of pure sensations uninhibited by any complex web of predetermined associations dominant in mainstream Hollywood cinema.

The 37 Films in the digital retrospective include:

The 1960s
9 Variations on a Dance Theme (1966/67) by Hilary Harri
Castro Street (The Coming of Consciousness) (1966) by Bruce Baillie
Film That Rises to the Surface of Clarified Butter (1968) by Owen Land, Excerpt from Walden: Diaries, Notes and Sketches (1969) by Jonas Mekas
Our Lady of the Sphere (1969) by Lawrence Jordan