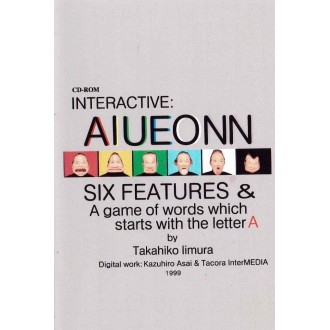 "Interactive: AIUEONN Six Features" (l998), a new CD-Rom, has been developed from the video"AIUEONN Six Features" (1993) by adding the interactivity to the video while retaining its basic character. Six exaggerated faces were originally created to animate the Japanese vowels, A I U E O and an extra NN, using computer hard- and software on a "System G" by Sony.

The CD-Rom first displays the synchronized version of the picture and the sound from "A" through "NN" continuously ("Demo"). Afterwards, in "Interactive" mode, one chooses pictures and sounds which do not correspond. If the face pronouncing the "A" sound is selected, for example, then the sound cannot be the "A" sound. Faces which have been selected are changed from color to black and white.

There are also two flashing buttons at the bottom of the screen, "single" and "series". When "single" is selected, the "A" face appears in the center of the screen accompanied by the "I" sound, thus de-synchronized the picture and the sound. For "series", the faces appear in "A,I,U,E,O,NN" sequence, but are accompanied by the sound of the next letter ("I,U,E,O,NN,A"). The purpose of this is to separate the entities of picture and sound, so one can perceive them accordingly. And to enjoy them. But some viewers might not be accustomed to such play and become frustated, in which case one must return to the "Demo". (T.I.)

"This CD is both simple and tricky - and also a funny lesson in Japanese. My four-year old son loves it, especially the crazy features. I guess that's the best credit an artist can get."
- Fred Andersson（Leonardo Digital Review, MIT Press, February,2001)

Digital work: Kazuhiro Asai
English version: William Thompson
The project was made possible by the grant from the Japan Art Fund, and Shiseido, and with the assistance of Art Front Gallery, Tokyo.