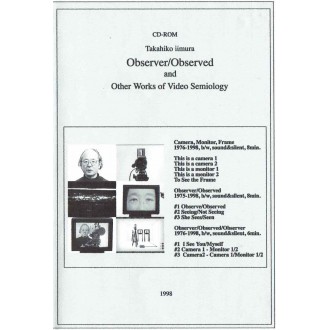 CD-Rom version of Observer/Observed conceived as  a multimedia piece with text and CG animation in addition to video. Compatible with Mac OSX4/Windows.

The main aim is a study of the structural relationships of video and language using English. Based on the feedback system of video, I assigned the system into the relation of the observer and the observed using the words as "I" and "YOU". What I am concerned is the structure of "seeing" involved for both the observer and the observed as in a sentence of "I see you", which is posited by the closed-circuit system of video. The video is the remake of 1975-76 version in shorter length without changing the concept.

The CD-Rom version is a multsimedia piece with text and CG animation in addition to video. Compatible with Mac OSX4/Window.

"In fact, Takahiko Iimura isn't really a theoretician, if we mean by that his theory could be shown for itself, separate from the object. On the contrary, object and theory are mutually activated, or even interpenetrated without obstruction. One could say in this sense that Kegon Buddhism's logic, long ago apprenticed to John Cage by Daisetz Teitaro Suzuki, grows in depth - a depth not reached by Nam-June Paik's TV-Buddha- in Iimura's art. "
- Daniel Charles, philosopher, author of "John Cage".

" Iimura is at his best deconstructing and reconstructing the video apparatus. Elemental and elegant, these works confront issues of language and semiotics through forms of direct address. Incisively presented, this CD-ROM offers a new generation access to classic works of video art and theory that move through stages of repetition and ennui to the point ofrevelation." -Peter d'Agostino, artist, and professor of media arts,Temple University, Philadelphia.