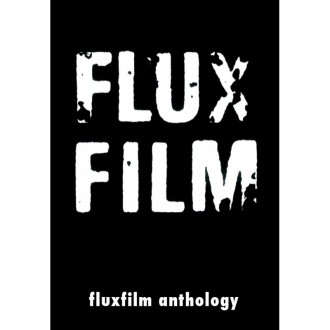 This pack includes these 4 DVDs at a special discount price :

Starting in the early sixties, Fluxus followed in the footsteps of the Futurist and Dada avant-gardes, going against the established grain of Fine Art and Official Art.
Fluxus‚ interdisciplinary aesthetic brings together influences as diverse as Zen, Science and daily life, and puts them to poetic use. Initially received as little more than an international network of pranksters, the playful artists of Fluxus were, and remain, a network of radical visionaries who sought to reconcile art with life.
Dating from the sixties and compiled by George Maciunas (1931-1978, founder of Fluxus), the Fluxfilm Anthology is a document consisting of 37 short films ranging from 10 seconds to 10 minutes in length. Elements of ephemeral environments, these films, some of which were meant to be screened as continuous loops, were shown as part of the events and happenings of the New York avant-garde. Made by the artists listed below, they celebrate the ephemeral humor of the Fluxus movement.
Contains a 32-page booklet by Maeva Aubert presenting the Fluxus artists and films.

George : The Story of George Maciunas and Fluxus - Jeffrey Perkins

George is a work of art itself that delivers guffaws that erupt unexpectedly between poignant moments from Maciunas’s childhood traumas to tangling with the mob and the attorney general of the State of New York during his innovations in constructing the loft culture of downtown Manhattan. Jeffrey Perkins’s George is an important new addition to the twin canons of art and anti-art.
-Mark Bloch, Brooklyn Rail

Few major entities in the art world are as hard to nail down as Fluxus. Was it a movement, theory or a collective whose members didn't always want to wear its name? Was it just a branding exercise? After nine years of research, Jeffrey Perkins finds that Fluxus was, above all, George Maciunas — an entrepreneurial Lithuanian emigrant who coined the name near the dawn of the '60s and spent the rest of his life decreeing what was and wasn't in Flux.
-John Defore, The Hollywood Reporter

Maciunas is above-all remembered as the chief ideologue and organizer of Fluxus, the loose inter- national network of anti-artists, neo-Dadaists, Happening practitioners, and other art-hustlers. Jeffrey Perkins—himself a Flux auxiliary, with a decades-long career in art and cab-driving has been researching and collecting interviews and ephemera on Maciunas’ legacy.
-Tyler Maxin, Screenslate
FILM :
George - The Story of George Maciunas and Fluxus - Jeffrey Perkins, 2017, 128 min

In a radical action like Nam June Paik destroying a violin, and rolling up in bandages the bodies of the players in in a concert by Yoko Ono, the international avant-garde group Fluxus changed not only art, but the concept of it.

Fluxus Replayed is a document of a 1991 performance in New York, which reproduced historical Fluxus performance pieces from the early 1960s.  The S.E.M. Ensemble together with some of the Fluxus artists themselves, perform works by Nam June Paik, Yoko Ono, Dick Higgins, George Brecht, Allison Knowles, Ben Patterson, Jackson Mac Low and Emett Williams.

"Taka iimura is a senior figure among contemporary Japanese artists and has been working with film, sound and video since the 1960s. He was one of several Japanese who, coming from a 20th Century tradition of avant-garde intervention, contributed to the Fluxus group in the 60s... As the cycle of experimentation moves through another generation, glimpses of precursors through archive recordings of this kind help ground artists’ surviving words and artworks."


Ludo Is Fantastic: A Portrait Of The Artist Ludo Mich

DVD also includes a download code for the soundtrack.
Disc is region free!

Since the early 1960’s, Ludo Mich has been actively operating on the fringes and the fringes of the fringes of the Antwerp underground art scene. Ludo exists inside the ‘M Dimension’ the world of his own creation in which he has produced a significant body of work across visual art, holographic sculpture, Fluxus film, performance, Avant Garde science and philosophy.

Now in his 70’s, Ludo’s work continues to gain integrity as he ignores conformity, financial gain and stays one step ahead of conventional and conservative art. Through a mix of archival footage, interviews with family and friends and fly on the wall footage, Ludo Is Fantastic immerses us in the world of the ‘Mich Dimension.’

Extras include:
A newly restored version of Ludo Mich's film 'Arthur Is Fantastic' from 1972
'De Minotaurus' (2005) - A film by Chris Gillis and Rufus Mich about Ludo Mich's performance 'Excavation of the Minotaur'.