George : The Story of George Maciunas and Fluxus - Jeffrey Perkins 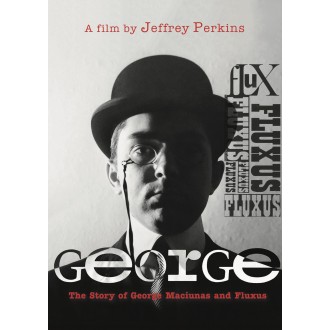 George is a work of art itself that delivers guffaws that erupt unexpectedly between poignant moments from Maciunas’s childhood traumas to tangling with the mob and the attorney general of the State of New York during his innovations in constructing the loft culture of downtown Manhattan. Jeffrey Perkins’s George is an important new addition to the twin canons of art and anti-art.
-Mark Bloch, Brooklyn Rail

Few major entities in the art world are as hard to nail down as Fluxus. Was it a movement, theory or a collective whose members didn't always want to wear its name? Was it just a branding exercise? After nine years of research, Jeffrey Perkins finds that Fluxus was, above all, George Maciunas — an entrepreneurial Lithuanian emigrant who coined the name near the dawn of the '60s and spent the rest of his life decreeing what was and wasn't in Flux.
-John Defore, The Hollywood Reporter

Maciunas is above-all remembered as the chief ideologue and organizer of Fluxus, the loose inter- national network of anti-artists, neo-Dadaists, Happening practitioners, and other art-hustlers. Jeffrey Perkins—himself a Flux auxiliary, with a decades-long career in art and cab-driving has been researching and collecting interviews and ephemera on Maciunas’ legacy.
-Tyler Maxin, Screenslate
FILM :
George - The Story of George Maciunas and Fluxus - Jeffrey Perkins, 2017, 128 min