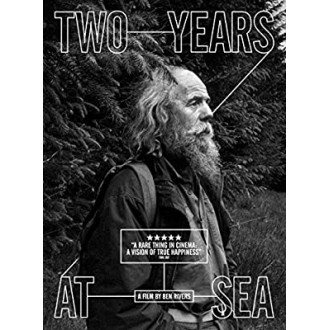 A DVD with a documentary film by Ben Rivers

LUX has worked with Soda Pictures on the DVD release of Ben Rivers' acclaimed feature film Two Years At Sea.

Using a 16mm camera and hand-processing the footage himself, artist Ben Rivers documents the solitary existence of Jake, a man who lives in isolation in the middle of the forest in remote Scotland. The film follows his unconventional life, capturing moments of profound beauty. Jake is seen in all seasons, surviving frugally, passing the time with strange projects, living the radical dream he had as a younger man, a dream he spent two years working at sea to realise. Gracefully constructed, Two Years At Sea creates an intimate connection with an individual who would otherwise be a complete outsider to us.

"... handmade cinema par excellence... Rivers' tactful, sympathetic film doesn't coax us into considering his subject a sage, a mystic or a madman; but making the most of the proximity that Williams allows, he paints a portrait of a man, and a way of life that - romanticism apart - comes across like a utopia of sorts." - Jonathan Romney, The Independent