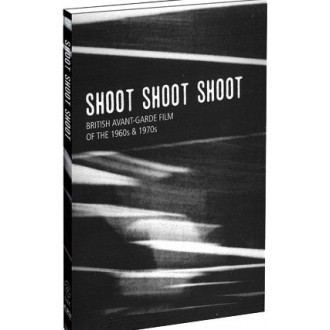 DVD OUT OF PRINT!!  LAST COPIES AVAILABLE!!
The 1960s and 1970s were groundbreaking decades in which independent filmmakers challenged cinematic convention. In England, much of the innovation took place at the London Film-Makers’ Cooperative, an artist-led organisation that incorporated a distribution agency, cinema space and film workshop. Within this unique laboratory, filmmakers were able to control every aspect of the creative process, and the physical production of a film – the printing and processing – became vital to its form and content. Many of the films made at the LFMC explored the physical nature of the film material, using production processes that shaped the form and content of the final works. British filmmakers also made significant innovations in the field of ‘expanded cinema’, creating multi-screen projections, film environments and live performance pieces.
"Shoot Shoot Shoot" took its name from a telegram addressed to Jonas Mekas and the New York Coop, announcing the formation of the London Film-Maker's Cooperative in 1966. Forty years have passed, but their work remains vital and contemporary. While this project has allowed a new understanding of the innovative character of of the films produced by the Coop in the sixties and seventies, these films are still rarely projected.
The Films
At The Academy, Guy Sherwin / Little Dog For Roger, Malcolm Le Grice / Sheperd’s Bush, Mike Leggett / Hall, Peter Gidal / Dirty, Stephen Dwoskin / Marvo Movie, Jeff Keen / Broadwalk, William Raban / Fforest Bay II, Chris Welsby / Slides, Annabel Nicolson / Film n°1, David Crosswaite / Dresden Dynamo, Lis Rhodes / Footsteps, Marilyn Halford / Leading Light, John Smith