Guy Maddin - Brand Upon the Brain! 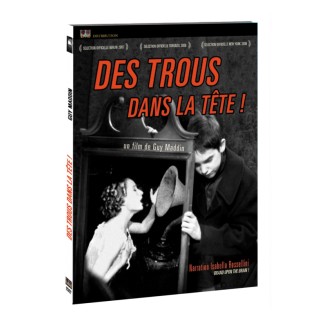 DVD of BRAND UPON THE BRAIN!, a film by Guy Maddin with bonus

Guy spent his youth on the mysterious island he would one day inherit. He lives in the lighthouse which serves as an orphanage with his sister, his parents and a horde of children whose every gesture is rigorously watched by Guy's domineering and tyrannical mother while his father, scientist and inventor, works day and night. night in the greatest secrecy.
Two detectives, Wendy and Chance Hale, arrive on the island after finding strange marks on the children's heads. Guy is in turmoil in front of Wendy, a first crush that drives her hormones into a panic, while her sister is crimson in her cheeks, numb with love for Chance, a love that must never be revealed to Mother.

Guy Maddin delves into his memories and his delirious imagination to create a work that is unlike any other, a surrealist plot in which terrible family secrets are gradually revealed.

An exuberant, abundant film, both funny and touching, a fairy tale for adults with images of great beauty, led by the haunting voice of Isabella Rossellini.