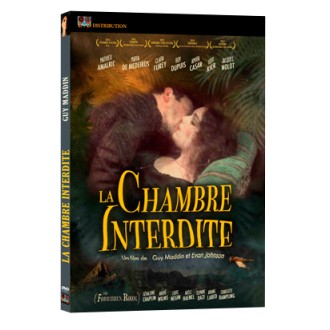 DVD of THE FORBIDDEN ROOM, a film by Guy Maddin with bonus

In the Plunger submarine, oxygen is scarce. The countdown to certain death has started. The crew search in vain for the captain, the only one capable of saving them. Suddenly, improbably, a lost lumberjack arrives among them and tells them how he escaped a formidable clan of cavemen. His beloved has been kidnapped by these fierce men, and he is ready to do anything to get her out of there.

Embark on the Plunger and travel around the world of dreamlike landscapes, in a whirlwind of adventures populated by femme fatales, madmen and frozen lovers.

Guy Maddin went in search of lost films, their characters and stories imagined by Hitchcock, Lubitsch, Ozu, Stroheim and other great masters. The actors (Mathieu Amalric, Charlotte Rampling, Amira Casar, Adèle Haenel, Ariane Labed, Jacques Nolot, Udo Kier ...) literally let themselves be possessed by the soul of these works during a shoot where each day began with a real spiritualism session invoking the spirit of these films. This astonishing encounter culminated in a feature film, The Forbidden Room, where the viewer embarks aboard a submarine and lets himself be carried away by the adventures of cinematographic specters that could not be more alive.