Seeing through the body 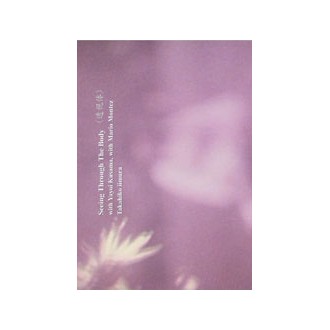 DVD with two films by Takahiko Iimura from the 1960s

FLOWERS
While I was staying in New York in the 1960s during the rise of the hippie movement, I filmed performances of body painting by the artist, Kusama Yayoi, together with the performers. As I wasn't satisfied with merely documenting her performance, made super-impositions of flowers over the performance, more as a film poem than a documentary, since flowers was the symbol of the hippie movement as given the name "flower children." The performance, however, is not always in the foreground, but is woven like fabric among the superimposed flowers. Furthermore another female figure (Akiko Iimura) is inserted with her kimono contrasting to the scenes of Kusama's. The film ends symbolically in long shots a flower patterned dress with no body is suspended over the Empire State Building behind. Nearly 40 years later Tomomi Adachi composed a music for the film. (T.I.)

FACE
In the same year that 'Flowers' was produced I happened to make the acquaintance of Mario Montez, a superstar of Andy Warhol's films whose name was taken after one time Hollywood Star, Maria Montez. I was attracted by his transvestite beauty. In addition to Mario's performance I also shot the performances by Donna Kerness, who had appeared in the black comedy of the Kuchar brothers' underground films, and Linda who was a personal acquaintance. Fiction and reality collide in microscopic montage with the sexual performances limited to only facial expressions in extreme close-up of those three females (including Mario). These close-ups were inherited from my earlier Love (1962), but this time the film was shot in color and focused on individual action. Perhaps the viewer's visual experience will be mixed, blurring the line between fiction and reality. A big, laughing voice throughout the film may sound <absurd> , yet at the same time the nature of life will fuse (or alienates for some) all. (T.I.)