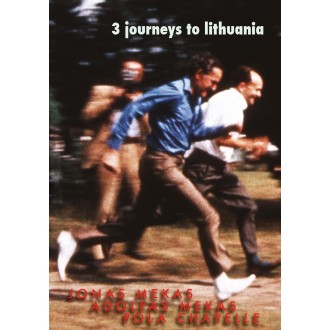 Adolfas and Jonas Mekas arrived in New York in 1949, leaving their native land, Lithuania, behind, caught between Nazi and Soviet occupation. Little by little the camera became their means of expression and cinema invaded their lives. 27 years passed before they could finally return to Lithuania. This is the odyssey the three films intertwiningly recall: Adolfas and Jonas Mekas and Pola Chapelle (Adolfas'ʼwife) are at once actor and filmer. The Mekas brothers rediscover their country and family with their changes, while Pola Chapelle is the external gaze embracing this reunion. Neither Lithuanian nor New Yorkers, where is their home now? As Jonas likes to say “My Country is Cinema.”

“You can't go home again – I thought the words of Thomas Wolfe, but didn't say them. The brothers were uneasy, but determined. We would make films of their return after so many years to the land of their birth. I would do sound with the little Uher, and in between, I would shoot my home movie on 8mm. One morning the five Mekas brothers stood in a line and allowed the family to measure their height. As Mama Mekas looked on, she spoke very solemnly. Adolfas translated for me. She said, 'My husband and I planted 5 birch trees. Two were straight and beautiful (Paul and Peter), one grew crooked (Costas with a limp) and two fell down.'ʼThe two that fell were Jonas and Adolfas. She lost them. All the time that we were with her, she never showed emotion. Only when she accompanied us to the airport in Vilnius, did I see tears in her eyes as Jonas and Adolfas embraced her. She loved them, and she would lose them twice.”
-Pola Chapelle