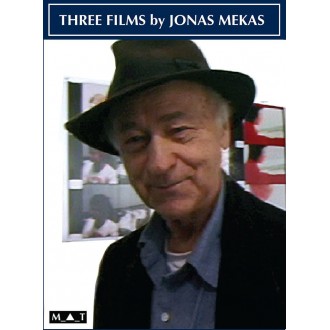 THREE FILMS by JONAS MEKAS
To many he is the inventor of the film diary form, but Jonas Mekas holds an historical place as a champion of the ideals of independent minded creative beings everywhere. It is with great pleasure that we present three rare, and less well-known classic works by Jonas Mekas in this long awaited high-end transfer from fresh 16mm prints to high resolution DVD.
Mekas' subjects range from simple flowers and trees to Salvador Dali, Allan Ginsberg and Norman Mailer; his young family and house cats, to filmmakers Stan Brakhage, Ken Jacobs and Samuel Fuller, Warhol and the Factory scene with the Velvet Underground, George Maciunas, and the Fluxus, group, to the Kennedy and Radziwill families summering in Montauk. When we see Jonas himself, in IN BETWEEN in the Dali sequence, it is because photographer Peter Beard has taken the camera in hand. A co-founder of The Film-makers Cooperative in 1963 and the Anthology Film Archives a few years later, Mekas changed the perception of experimental and independent film itself, partly through his impassioned articles and reviews published weekly in the Village Voice for 2 decades. He sounded clearly the call for artists in every discipline, to make original and honest work and he fought, with the other creative workers of his times to established freedoms that today many take for granted.
In THREE FILMS by JONAS MEKAS, he can be seen, with his joys and doubts, traveling, playing, and mining the philosophy, poetry and expression of what independent cinema is. He renders to the viewer in his signature, single framing technique, a persuasive and compelling vision of 60s - 70s cultural life. Meka,works today with digital video and the Internet, as well as exhibiting his films and award winning installations internationally in museums and galleries. Recipient of numerous international awards and honors, including grants from The Rockefeller Foundation, The National Endowment for the Arts, a Guggenheim Fellowship, he was made a Chevalier de l'Ordre d. Arts et des Lenms, in 1992, and in 2006...Mgka5!, installation for the Lithuanian pavilion won a prize in the Venice Biennial.

WHEN 1968, color, silent A very rare film "manifesto" by Mekas made in 1968 in New York, in the activist spirit of positive revolutionary change; his source for inspiration is the American, Declaration of Independence.

BED IN Love to Yoko and John 1969-2005, color, play & sing along "Give Peace a Chance" This delicate impressionist film poem was made in part as a gift of friendship at an historic event to promote peace during the cold war and Vietnam war. era. We see Yoko, who had been a friend of Jonas' through their mutual involvement with George Maciunas and the Flu,us group, making a peace event in bed on her honeymoon with Beatle, John Lennon. Among their guests in the film are Timothy Leary and Yoko's daughter Kyoko. Originally this film was chronologically embedded in .1,4,kas! epic work in two parts, WALDEN; here for the first time it can be seen as a film on its own.

IN BETWEEN 1964-68 (1978) 16mm, color, sound, 52 min
"Filmed in 1964-1968. Edited in 1978. The material for this film is footage that didn't find a place in the WALDEN reels. Some of it begins in between LOST, LOST, LOST and WALDEN. mostly New York, and some travel footage. The City friends: Richard Foreman, Amy Taub., Mel Lyman, Peter Beard, David Wise, Andrew Meyer, Salvador Dali, Jerome Hill, David Stone and Barbara Stone, my brother Adolfas filming
DOUBLE BARRELLED DETECTIVE STORY, Diane di Prima, Allen Ginsberg, Norman Mailer, Ed Sanders, Gordon Ball, Henry Romney, Jack Smith, Shirley Clarke, Louis .Brigante, Jane Holzer, etc. etc. It's a period piece. The sounds were recorded about the same time. Bits of radio music, bits of records, of my own voice and voices of my friends. Mel Lyman playing playing banjo on the roof on 23rd Street was actually recorded on the roof, with the wind blowing into the mike."
-Jonas Mekas

Produced by•MEDIA_A_TRIANGLE with the participation of Jonas Mekas
Limited Edition: 1000 each of NTSC DVD Made from 16mm // Telecine  HD encodes