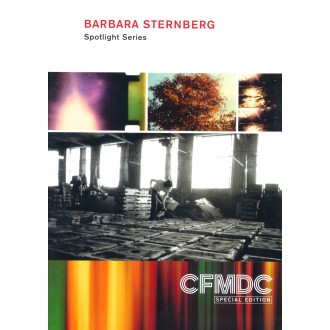 For more than thirty years, Barbara Sternberg’s filmmaking has considered the mysteries of human existence. Drawing on the creative power of the cinematic medium to make the invisible visible, Sternberg’s films use a resolutely personal approach to explore rhythm, time, space, and the nature of the everyday.

1) Opus 40 (1979, 16mm, 14:30 min.)
“Opus 40” is about repetition: repetition in working and living, repetition through multiplicity and series, repetition to form pattern and rhythm, repetition in order and in revealing. “Opus 40” was filmed in the Enterprise Foundry, Sackville, New Brunswick, and has excerpts from Gertrude Stein’s writings.

Opus 40 from B.Sternberg on Vimeo.

2) Transitions (1982, 16mm, 11:30 min.)
“Transitions” is a film of inner life and speaks of time, reality, power. It depicts the disquieting sensations of being between - between falling asleep and being awake, between here and there, between being and non-being. These metaphysical themes are evoked by the central image of a woman in white over which layers of images and sound (voices) are superimposed.

3) Like a Dream that Vanishes (1999, 16mm, 39 min.)
“Like a Dream That Vanishes” continues Sternberg’s work in film both thematically and formally: the ephemerality of life echoed in the temporal nature of film, as the stuff of life echoed on the energy, life-force in rhythmic light pulses. (Your life is like a candle burning.) Imageless emulsion is inter-cut with brief shots of natural elements and mise-en-scene of the stages of human life: a little boy runs and falls; teens hang out together at night smoking; sun shines through tree branches; men pace, waiting; flashes of lightning; an elderly man speaks philosophically about miracles.

4) Burning (2002, 16mm, 7 min.)
A multiplicity of diverse images - cut together rhythmically flicker with energy fire, light, life. "Your life is like a candle. Whether you are aware of it or not, it is burning." - Sri Sri Ravi Shankar