◊ FILMS◊By label◊CFMDC◊Artist on Fire: The Work of Joyce Wieland

Artist on Fire: The Work of Joyce Wieland 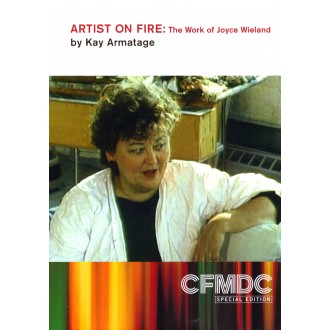 This documentary film combines expressionistic uses of cinematography and sound to examine Wieland's work in all media.

Joyce Wieland was, for well over thirty years, one of Canada's most exciting and innovative artists. She worked in virtually every artistic medium, including cloth works, pastels, coloured pencils, oils, bronze, watercolours, and films of all gauges. One of the founding group of what came to be known as structural filmmakers in New York in the late 60s, she was also one of the first artists of this century to break into women's traditional crafts as an art form, and used both film and cloth works as platforms for her principal political subjects - ecology, Canadian nationalism, and feminism.

This documentary film combines expressionistic uses of cinematography and sound to examine Wieland's work in all media. Avoiding both the chronological treatment usually found in retrospective considerations of artists' work and the conventional voice-over narration common to films on art, “Artist on Fire” offers an analysis of thirty years of Wieland's work that is rich in both detail and contextual information. Armatage combines a complex interweaving of multiple unscripted voices which are intricately edited and embedded in an evocative soundtrack of effects and music (mostly modern, electronic and Canadian) with an illuminating juxtaposition of images: excerpts from Wieland's work over twenty years, artworks in many modes and actuality footage of Wieland at work.

"An astoundingly dynamic piece of filmmaking - an intense marriage between Armatage and Wieland’s art." - Carole Corbeil, Globe and Mail.