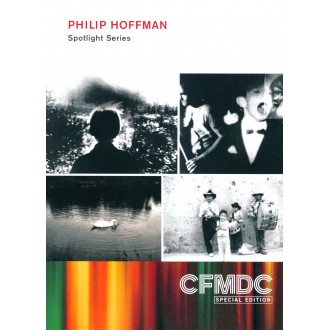 Described as Canada’s “pre-eminent diary filmmaker,” Philip Hoffman has been making work since the late 1970s. Expanding the boundaries of the personal documentary, his films explore themes of family, memory and loss while at the same time interrogating the film medium and the authenticity of the photographic image.

“Philip Hoffman is a precious resource, one of the few contemporary filmmakers whose work provides a bridge to the classical themes of death, diaspora, memory, and, finally, transcendence.” - Martha Rosler.

1) Somewhere Between Jalostotitlan and Encarnacion (1984 16mm 6 min.)
“Somewhere Between... is a Catholic drama of life and death played out in the streets of North America. Its gesture is a public circumstance: a horn band in Guadalajara, a Catholic procession in Toronto, distant passing traffic in Colorado. These scenes are presented, each in their turn, as separate and discrete events moving between titles describing a boy lying dead. They are a discourse that moves a geography of surface into concert with a transcendental history, a history of death.” - Mike Hoolboom, Vanguard

2) ?O,Zoo! (The Making of a Fiction Film) (1986 16mm 23 min.)
“?O, Zoo! (The Making of a Fiction Film) is ostensibly about the making of Peter Greenaway's feature film, A Zed and Two Noughts, the production of which Phil Hoffman was invited to the Netherlands to observe. However, Hoffman's film actually concerns the terms and conditions under which it was itself made. In part, the film translates actuality and memory into invention and fiction in which the symbolic father is cast as a real ancestor. Hoffman rewrites the Canadian documentary tradition into a family memory and romance.” - Blaine Allan, A Play of History

3) passing through/torn formations (1988 16mm 43 min.)
“Passing through/torn formations is a wide open ramble through the labyrinth of memory... The film deals with the life and history of Hoffman’s Czech-born mother and her family, as presented as a kind of polyphonic recitation of words, of images and of sounds.”
- Robert Everett-Green, Globe & Mail

“passing through/torn formations accomplishes a multi-faceted experience for the viewer. It is a poetic document of family, for instance- but Philip Hoffman’s editing throughout is true thought process, tracks visual theme as the mind tracks shape, makes melody of noise and words as the mind recalls sound.”
- Stan Brakhage