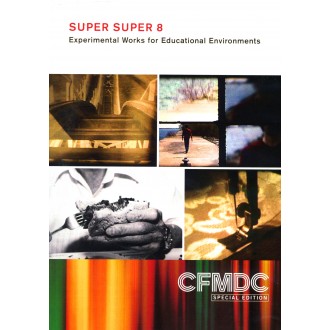 Special Edition DVD of 9 films. A compilation of works by both emerging makers and lifelong Super 8 devotees.

Introduced as a home-movie format almost 40 years ago, Super 8 film remains a vital and accessible medium for filmmakers worldwide. This compilation of works by both emerging makers and lifelong Super 8 devotees provides a glimpse into the form, aesthetics and politics of this popular but often overlooked gauge.

2) All U Can Eat by Stevi Urben (2003 / Super 8 / 12 min.)
Increasingly separated from his place of birth, a 70-year-old Jewish native of Quebec fuses personal and historical memory to create a sense of belonging.

4) Evanesce by Jamie Phelan (2003 / Super 8 / 5.5 min.)
Phelan confronts the possibility of losing his sight and tries to make sense of the memories trapped in pictures that are disappearing before his very eyes.

8) Reading Canada Backwards by Steven Topping (1995 / Super 8 / 12 min.)
A travel log of a technical object keeping time on a big train. 4000 miles from Vancouver to Halifax with three frames of film shot for every mile.