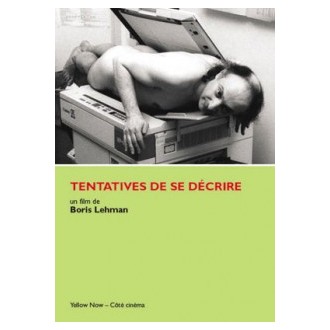 Full text of the film and stills from the film

Take a tour:
I come back to myself as in a nostalgic dream each time filming what is no longer what is dead in me, the past already and the shadow of myself […]
[…] Attempts to describe oneself would be a film about representation. How we can, through cinema, describe ourselves and the other. The camera as a mirror and as a third eye. Initially, an epistolary film, an investigation and a journey conceived as a collage, between documentary and fiction. On arrival a portrait of Boris Lehman between 1989 and 1995, two of Babel's suite.

Coming after Letter to my friends who remained in Belgium (1991) and History of my life told by my photographs (2002), Attempts to describe oneself presents itself to us as the third episode of Babel, a biographical romance and cinematographic saga in which Boris Lehman me. had confided one day his plan to make it last twenty-four hours. If you count correctly, we are halfway there, but hardly any further ahead, so much does the impression of a chronology backwards, if not frankly complex, at the very least upset, convey here. Edited after Babel 2, Babel 3 was indeed shot in the immediate wake of Babel 1, which still makes fifteen years, a way of saying that we must give the films time to come, to experience the chance. to make a deposit, but above all to admit that the one who, in 2005, finishes assembling these images and these sounds is no longer completely the one who had recorded them between 1989 and 1995. Between these dates, time has done its work, a decade has been accomplished and with it the making of other films, the death of loved ones, a ripening, another state of cinema. The beauty of Attempts to describe oneself, its formidable capacity to move us, the dynamic that the film sets in motion poetically, result mainly from this gap, from this rivalry assumed between two distinct temporalities which, far from ignoring each other, on the contrary play at each other. face, echoing between them the echo of their own questions. Actuality of the editing versus actuality of the shooting: of course, in the cinema, these two times are always different, but they clash here more than usual; they are refined, they light up, they reflect each other.
In the present of the shooting (1989-1995): the reality of sequences conceived in the aftermath of Letter to my friends who remained in Belgium, sip of the memory of this first part and activated like him by the resumption of the same motif of the appearance, in the same invention of the person of the filmmaker as a movie character in which to hide his modest part under the panoply of a double who would also be a fictional being. In this present again: the gradual observation of an impasse, the fear of being stuck, the impossibility of repetition, by virtue of the principle according to which one film is never the other, consciousness which leads it to take the alibi of a workshop director in Montreal to question his associates there, his brothers in cinema, in order to understand how his fellows do with their own attempts to describe themselves. Gilles Groulx (filmed at the approach of death), Robert Daudelin (whose image projected on a screen is crossed out on the film), the Gagné brothers (in derisory and masked clowns holding a small brol business), all of them refer to the fragility of appearances, to the threat of a possible dissolution, to the specter of his own worn and dismembered body, of which he must now pick up the pieces, if only to continue to make his life the sensitive center and nervous about all his films.
In the present of the montage (2003-2005): the exercise of a gaze that has now become a gesture of critical distancing, but without denial, of these filmed traces from another time; the act of liberating a filmmaker who has come back from afar and is now reconciled, having found in the experiences of his most recent shoots so many opportunities to recompose himself. Story of my life told through my photographs (the joyful entry of Boris Lehman into the era of technical reproducibility where sentimental archiving is above all a pretext to relaunch the meeting), The Last Supper (playful adaptation of an old scenario Evangelist, with a real kiss from Judas against a background of destruction in Brussels), Man carrying (testamentary meditation on the future of images and artist performance or the Passion according to Boris, Sisyphus and wandering Jew, poet and martyr): as many films with a serious subject, shaped by the figure of disappearance, haunted by the inevitability of the loss of both bodies and supports; yet so many steps towards more and more lightness despite the heaviness of the task, so many steps towards a pure pleasure of the game as a mode