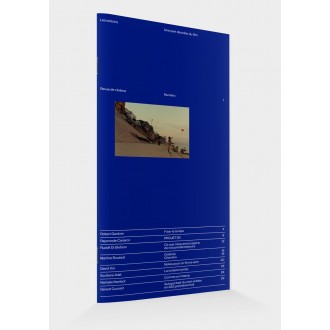 The review Seasons brings together filmmakers for whom writing is not just the film's sealed archive but a path to the very experience of cinema as what secretly inhabits it. To create The seasons is to reread this intimate, torn apart story of the writing of the film and the diversity of its designs. Unveil its character as intermittent as it is unlimited. The seasons transport the reader to where the texts were born, to this threshold and center of gravity where the film swirls. It is the variegated forces of the written word, a minority reference, a discreet part of the film and the open otherness of the camera, which will allow the seasons to see between the images or behind them, in the unprecedented projection of their writing. The review will be their pooling, the projection of the underground of the written into the image, the writing of the film as a practice and as a form of cinema life.

Also, the magazine Les Saisons carries with it the programming of films by published filmmakers. It therefore organizes a series of screenings of films directly linked to the texts from which they emanate. A magazine which finds, at its crossroads, the place between writing and image. This interval created by The Seasons, from page to screen, from book to room, will be the occasion of a reverse shot, turning a movement of publication towards that of a programming. See the script to relive the films.

NOTES, POEMS, LETTERS, MEMORIES, STORIES, INTENTIONS, PRE- OR SUB-WORLD OF GHOSTS, DRAFTS, ARCHIVES OR TESTIMONIALS, HESITATION OR REPENTANCE; THE SEASONS REVIEW RELEASES THE SCRIPTURES OF THE FILM AS SO MANY INVENTIONS THAT INHIBIT THE IMAGINATION AND DIRECTION OF THE FILM; WRITING AS A MOVIE PRACTICE.