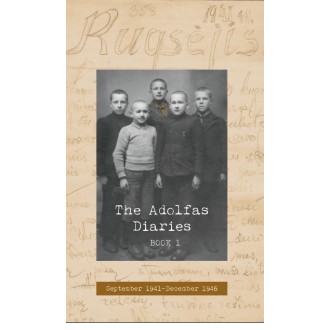 Book 1 of The Adolfas Diaries is the first of a series of 3 books of a journal written by Adolfas Mekas, and translated by him in 1973 from the original Lithuanian.

Book 1 - September 1941 to December 1946 - covers the years in his homeland of Lithuania, then occupied by both Nazi German military forces and the military forces of the Soviet Union; his escape from Lithuania and subsequent arrest and internment in a Nazi labor camp; and the beginning years spent in postwar Displaced Persons camps in the British and American zones of Germany.

“A riveting and humane account of the struggle and survival of one of the most colorful and brilliant filmmakers of his generation. For those like Mekas, caught between Nazi Germany and the Soviet Union, the war altered the perception of the meaning of life and the words and images used to cope with life. Adolfas Mekas’s diary is a gift of remembrance to future generations.”
Leon Botstein, President, Bard College

“Through his editorship with brother Jonas of the magazine ‘Film Culture’ he proved himself an early encourager – to have people think about films as well as enjoy them. He was also, when you spent time with him day-to-day, a twinkly-eyed magician, a master at turning gray skies blue. He could always make a party when boredom or misery threatened. His own past gave him plenty of opportunity to outwit misery: he and his brother spent part of their teen years first in a Nazi labor camp and then, postwar, in a succession of displaced persons camps. His diaries, now lovingly and carefully edited by his wife, singer and arts producer Pola Chapelle, are, page after page, testimony to what is often too facilely called, the triumph of the human spirit.
Adolfas, whom we lost too soon in 2011, gives us a real account of triumphing-against-all-odds, written in a prose that is by turns innocent, poetically vivid, and when translating what’s worst in life, inarguable. It takes the soul of a powerfully forward-thinking artist, as well as a life-adaptor, to transfer both good and bad into inspiriting words. Adolfas did.”
Billy Siegenfeld, Director of the Award Winning Jump Rhythm Jazz Project and Artist-in-Residence at Northwestern University

“Like a bowl of hot soup on a cold day. You just want to tuck in.”
Scarlett O’Leary, Mother and Actress

“A treasure. Such an odyssey and testament to human spirit, wit and resilience. In view of our current world, insight into the displaced experience in war. A very dark time survived with grace. And his charm is intact, his light touch, his genuineness as a human being that was felt by his students, by me.”
Robert Selkowitz, Artist and Author