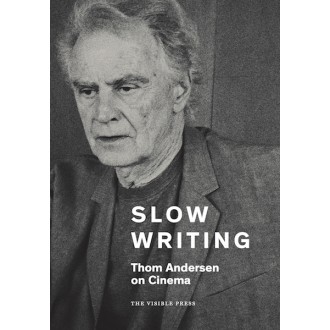 Slow Writing is a collection of articles by Thom Andersen

Slow Writing is a collection of articles by Thom Andersen that reflect on the avant-garde, Hollywood feature films, and contemporary cinema. His critiques of artists and filmmakers as diverse as Yasujirō Ozu, Nicholas Ray, Andy Warhol, and Christian Marclay locate their work within the broader spheres of popular culture, politics, history, architecture, and the urban landscape. The city of Los Angeles and its relationship to film is a recurrent theme. These writings, which span a period of five decades, demonstrate Andersen’s social consciousness, humour and his genuine appreciation of cinema in its many forms. Thom Andersen’s films include the celebrated documentary essays Eadweard Muybridge, Zoopraxographer (1975), Red Hollywood (1996), Los Angeles Plays Itself (2003), and The Thoughts That Once We Had (2015).