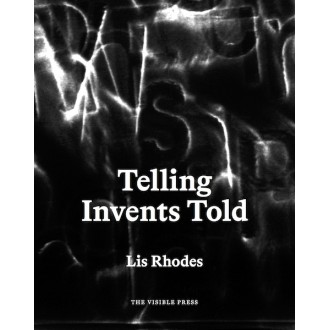 This first anthology of writings by British artist and filmmaker Lis Rhodes features texts dating from the 1970s to the present.

Telling Invents Told is the first collection of writings by artist and filmmaker Lis Rhodes. It includes the influential essay Whose History? alongside texts from works such as Light Reading, Pictures on Pink Paper and A Cold Draft, together with new and previously unpublished materials. Since the 1970s, Rhodes has been making radical and experimental work that challenges hegemonic narratives and the power structures of language. Her writing addresses urgent political issues – from the refugee crisis to workers’ rights, police brutality, racial discrimination and homelessness – as well as film history and theory, from a feminist perspective. An important figure at the London Film-Makers’ Co-operative, Rhodes was also a founding member of Circles, the first British distributor of film, video and performance by women artists.