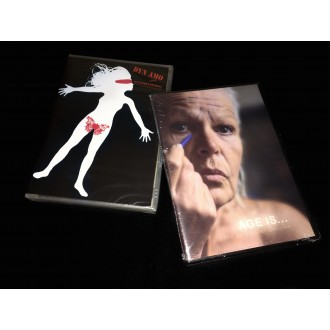 2 films by Stephen Dwoskin and a documentary about the filmmaker

Age is...(2012)
The film is an ode to the texture, the beauty, the singularity of aging faces and silhouettes, a hypnotic poem in the « Dwoskinian » meaning of the term which is long observations of very tiny details

Each Dwoskin film could be described thus: a man  watches a woman who returns his gaze. This arm wrestling match lasts as long as it needs, at times as soft as a caress, as intense as a demand.  At times fear, rejection, wounded pride and withdrawal permeate this tense cinema paralyzed by gazes at the camera. Like at a peep show, his films watch in complete isolation. They speak to everyone’s solitude.
-Philippe Azoury
Cinexpérimentaux 9: STEPHEN DWOSKIN

Stephen Dwoskin was born in New York in 1939 and began making independent shorts there in 1961. In 1964 he followed his research work to London where he settled and participated in the founding of the London Filmmaker’s Co-op. His experimental films, for which he himself does the camera work, play with ideas of desire, sexual and mental solitude and the passage of time. In his films he also explores representation in cinema, performances, personal impressions and his own physical handicap which has been a source of inspiration for him throughout his career.  His sensitive and emancipating works have been the subject of various international presentations.