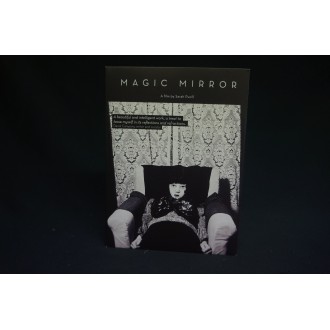 Sarah Pucill has been making 16mm films since completing her MA at the Slade in 1990. Since then her films, which have all received public funding, have been screened and won awards internationally at festivals, and have been staged in museums and galleries. Her retrospective screenings have included the Tate Britain, BFI Southbank, Anthology Film Archives (NY), Pleasure Dome (Toronto), Ecole des Beaux Arts, and LA FilmForum.  Shot on 16mm b/w, Magic Mirror (2013) premiered at Tate Modern, with further screenings at ICA and London Art Fair. She is currently planning a sequel to Magic Mirror. She lives and works in London and is Reader in Fine Art at University of Westminster.

Part essay, part film poem, Magic Mirror film by Sarah Pucill translates the startling force of Claude Cahun's ouvre into a choreographed series of Vivantes Tableaux. Re-staging the French Surrealist's black and white photographs with selected extracts from her book 'Aveux Non Avenus' (Confessions Cut Off), the film explores the links between Cahun's photographs and writings. Claude Cahun's multi-subjectivity, as expressed in both her photographs and book, set the scene for the film, where she dresses and makes her face up in many different ways, swapping identities between gender, age and the inanimate. Three women masquerade as Cahun's characters: often it is hard to tell them apart. The splitting of identity appears as a double which persists throughout; as literal double through super imposition, as shadow, imprints in sand, reflections in water, mirror or distorting glass. Likewise, the voice is split between differently dressed voices, which at times overlap, and at times are in conversation. The kaleidoscope aesthetic that runs through the film serves not only to weave between image and word but also between the work of Cahun and the films of Sarah Pucill, creating a dialogue between two artists who share similar iconography and concerns.