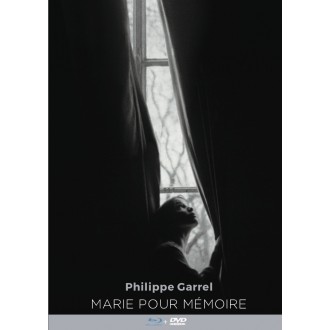 After ''Le Révélateur'', ''Le Lit de la Vierge'' and ''Les Hautes Solitudes'', RE:VOIR is pleased to offer you an unprecedented edition of Philippe Garrel's first feature film: ''Marie pour mémoire'' . A return to childhood, to the primitive gesture of the filmmaker, to his teenage years of cries and revolts, mutism and withdrawal. This edition also includes his first short film, which he directed at 16 in three days only, with the short ends from a film sketch by Claude Berri, on which he was trainee. Finally, there is the famous ''Actua I". A revolutionary news film - supported by Jean-Luc Godard - on the month long barricades of May '68, finally unearthed after 47 years from the JLG film archive.

These 3 films have a common theme: adolescence, the age of revolt. What is remarkable for the filmmaker is that they are driven from a young age by radically different visions and gestures. ''Marie pour mémoire'' is one of the more distant fiction conceived in autobiographical approach in the filmmaker's filmography, tending towards a slow dive into madness and fabulation.

''Les Enfants désaccordés'' is a film where Garrel closely examines his intimate connections to his father (s), to society, to vitality.
Finally, in contrast to the passivity and disintegration of the first two films, ''Actua I'' stands as one of the greatest visual pamphlets of the twentieth century.

"At the time, I was writing texts, but now to define the world as I see it, showing an image is easier than speaking with words. "
"I did not choose to be marginalized. I was literally pushed out."
-Philippe Garrel, about ''Marie pour mémoire'' and ''Les Enfants désaccordés'' (Retrospective Philippe Garrel - A dazzling despair, MMCA Film and Video - Open Cinema, Seoul, South Korea, 2015-2016)

"Late 60s, the golden age of Barthes, Lacan, Debord, Marx and Coca-Cola ... A child of this era but also of Langlois and Murnau, Philippe Garrel, a silent young man, directs his first long feature, ''Marie pour mémoire''. Today, the film is as dated as it is oddly current. Have lived through declamatory tirades, the distanced acting of some actors, the 2-CVs in the streets of Paris. Have retained all their strength and beauty the primitive scenes of Garrel as son, the comic power of Garrel as father, the presence and the face of Zouzou, his silences and his looks, the evocation of social violence, sentimental dereliction and solitude. Any small chronicle, inversely proportional to the film, for memory."
-Serge Kaganski, The Inrockuptibles, 22/09/1999