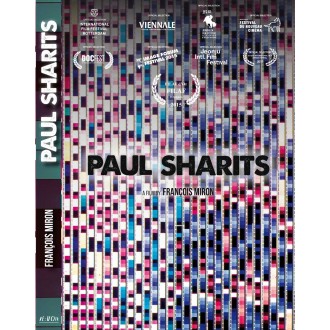 A feature-length documentary by François Miron about Paul Sharits. DVD contains a 40-page booklet with a text by Yann Beauvais

A crucial figure in 1960s-70s avant-garde film, Paul Sharits was a pioneer of structuralist cinema, an approach to filmmaking that emphasizes and explores the formal dimensions and physical properties specific to the medium. A deeply committed and visionary artist, Sharits began exploring the potential of the single frame and the flicker effect in the mid-1960s, and continued to make many films that took as their subject the filmstrip itself. Long celebrated among avant-garde filmmakers and scholars, he has also recently been embraced by art museums and galleries for his innovation in reworking 16mm films into multiple projection installations, filmstrips mounted between Plexiglas sheets, and ink colored partitions for abstract films.

The first feature-length documentary about Sharits, François Miron’s film is both a perceptive exploration of his oeuvre by a filmmaker who has studied Sharits’ work in depth, and a revealing account of his often troubled life. Featuring interviews and footage of Sharits along with new interviews with other filmmakers, scholars and family members, the documentary sketches a portrait of a tormented, deeply romantic artist, always courting disaster but also cursed by an inherited mental condition. PAUL SHARITS is both a terrific introduction to Sharits’ life and work, and, for those with a longstanding interest in the filmmaker, a treasure trove of rare footage, illuminating commentary and archival materials.

PAUL SHARITS - a documentary film by François Miron from Re:Voir Video on Vimeo.