From the Journals of Jean Seberg 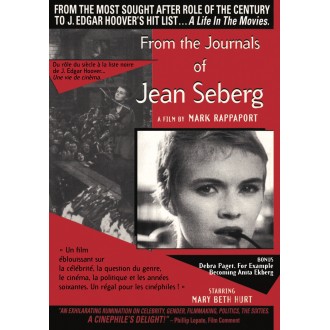 Mark Rappaport, a native of New York, worked as a film editor before making his own films, including The Scenic Route (1978), Impostors (1980), Postcards (1990) and Exterior Night (1994). His film-essays include Rock Hudson's Home Movies (1992), From the Journals of Jean Seberg (1995) and The Silver Screen / Color Me Lavender (1998). Many of his articles on cinema have been published in the French film journal 'Trafic' over the years, as well as in 'Cinema'. The spectator who knew too much is the first collection of his writings. In 2008, his photomontage film was screened for the first time at the Lincoln Center in New York, as part of the New York Film Festival. Mark Rappaport currently lives in Paris.

From the Journals of Jean Seberg
This deconstruction of the life and career of this Midwestern girl, Hollywood star at 19, New Wave icon at 21, and suicide at 40, is undertaken by Seberg herself, as embodied by Mary Beth Hurt. The spirit and inventiveness of Rappaport's script, combined with the endless flow of disillusioned observations and carefully chosen and nervously edited film extracts, make this film a remarkably stimulating piece.
___________

Mark Rappaport - From the Journals of Jean Seberg (trailer) from Re:Voir Video on Vimeo.