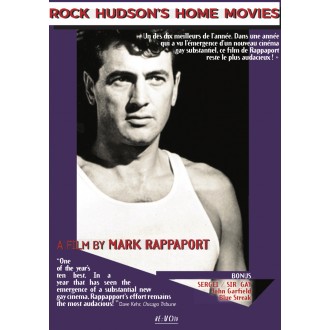 Mark Rappaport, a native of New York, worked as a film editor before making his own films, including The Scenic Route (1978), Impostors (1980), Postcards (1990) and Exterior Night (1994). His film-essays include Rock Hudson's Home Movies (1992), From the Journals of Jean Seberg (1995) and The Silver Screen / Color Me Lavender (1998). Many of his articles on cinema have been published in the French film journal 'Trafic' over the years, as well as in 'Cinema'. The spectator who knew too much is the first collection of his writings. In 2008, his photomontage film was screened for the first time at the Lincoln Center in New York, as part of the New York Film Festival. Mark Rappaport currently lives in Paris.

Rock Hudson's Home Movies
This is a collage film that works as a review of film history that revisits Rock Hudson's films in the light of what everyone knows about him, now-essentially that he was homosexual and died of AIDS. Rock Hudson is a unique paradox-the paradigm of manhood on the screen that happens to be a homosexual. The fictional construction of Rock Hudson turns into a text to be read or re-read in many different ways-but all roads lead to Rome. Rock Hudson was a prisoner as well as provider of a strategy and sexual stereotypes. It is a prism through which one can explore the questions of sexuality, the coding of the genre, the sexual role play in Hollywood movies and, by extension,America in the fifties and sixties. ___________

"This brilliant hour-long video transferred to film by independent filmmaker Mark Rappaport is in effect a subversive piece of film criticism that departs from the fic- tional conceit of Hudson himself (represented through clips from his films and by actor Eric Farr) speaking from beyond the grave about his homosexuality and what this did or didn’t have to do with his countless heterosexual screen roles. [...] Rappaport plays his new brand of film criticism like a grand organ. Showing us a way to talk back to the movie mythologies that influence and often corrupt us, even to the point of poisoning our dreams, he suggests that we don’t have to be million- aires or commandeer a television network to enter into a dialogue with the crushing Hollywood machine."
-Jonathan Rosenbaum, Chicago Reader Mark Rappaport’s brilliant compilation of moments

"from the Hudson oeuvre that confirm or deny the actor’s homosexuality is first-rate film criticism as well as a reanimation that invests ‘Rock Hudson’ with a pas- sion and pathos barely evident the first time around."
-J. Hoberman, The Village Voice

“One of the year’s ten best. In a year that has seen the emergence of a substantial new gay cinema, Rappapport’s effort remains the most audacious - an appropriation of Hudson’s Hollywood films that reveals their hidden subtext.”
-Dave Kehr, Chicago Tribune

“Impudently insightful in its wisdom... This film is a subversive delight, refracting a revisionist cast on the relationship between illusion and reality as embodied by perhaps the greatest myth-maker of the 20th century - the Hollywood movie machine.”
-Duane Byrge, The Hollywood Reporter