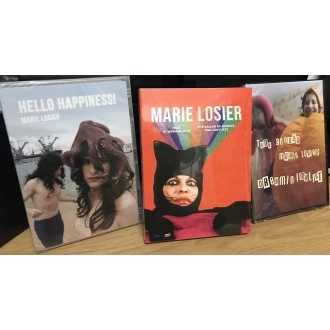 New York filmmaker born in Paris, Marie Losier begins filming, with portraits of people she met in New York, documenting their lives from what she sees and what she feels after many years in theater and painting which had a great influence on her. Then she uses her imagination to represent these characters or situations as in a tableau vivant. Always with the materiality of the film which requires a certain way of working, her cinema develops a mystery, a magical moment.

Everyday life was transformed into a kind of show, something theatrical. I think this is where lifeand documentary come together, without being forced. I learned from some of the most extravagant people ! (Marie Losier)

Marie Losier is the most effervescent and psychologically accurate portrait artist working in film today. Her films wriggle with the energy and sweetness of a broken barrel full o’ sugar worms!!! No one makes pictures like Marie, Edith Sitwell’s inner Tinkerbell!!!
-Guy Maddin

Marie Losier’s movies are as sweet and sassy as her name and well worth a gander or goose by all off beat cineastes. So beat off to a different drum and marvel at the wad of wonders that only a French woman could generate. Take a trip down a sprocketed spiral of celluloid strips into a glory hole of impressive dimensions. What pops through will surely enlarge with persistent, ocular manipulation.
-George Kuchar

This DVD has a documentary film about the life and work of Tony Conrad.  Also includes his masterpiece of experimental cinema THE FLICKER.

"Marie Losier is the most effervescent and psychologically accurate portrait artist working in film today. Her film wriggle with the energy and sweetness of a broken barrel full o' sugar worms!"
-Guy Maddin