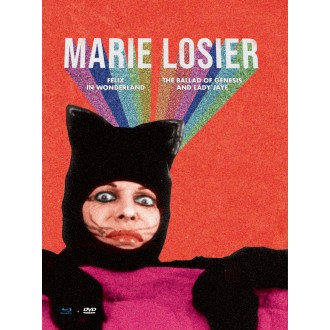 DVD & Blu-ray with Felix in The Ballad of Genesis and Lady Jane, Felix in Wonderland and other 10 short films by Marie Losier
OFFICAL RELEASE DECEMBER 9, 2021

New York filmmaker born in Paris, Marie Losier begins filming, with portraits of people she met in New York, documenting their lives from what she sees and what she feels after many years in theater and painting which had a great influence on her. Then she uses her imagination to represent these characters or situations as in a tableau vivant. Always with the materiality of the film which requires a certain way of working, her cinema develops a mystery, a magical moment.

Everyday life was transformed into a kind of show, something theatrical. I think this is where lifeand documentary come together, without being forced. I learned from some of the most extravagant people ! (Marie Losier)