The Films of Stefan and Franciszka Themerson 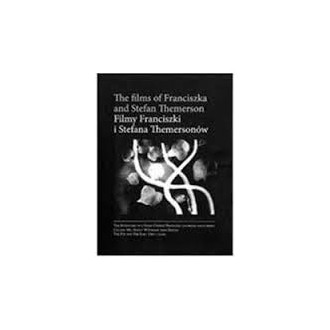 DVD containing the three surviving films by Stefan and Franciszka Themerson accompanied by an 86 page book.

The Themersons had a significant influence on the art and philosophy of the avant-garde of Eastern Europe during the 1930s. Their work reflected something of the Dada and Constructivist forms and ideas of the time, but what most distinguished them throughout their lives, was their remarkable invention and technical experiment. This was true of every field they became involved in: photography, literature, art, design and publishing, as well as film. They were the most important makers of avant-garde film in pre-war Poland. After they settled in London in the early 1940s, they made two films under the auspices of the Polish Government in Exile including their first British film, Calling Mr Smith (1943), a rallying call to open the eyes and minds of the British public to Nazi atrocities in Europe. In London they became key figures in the post-war cultural scene, founding Gaberbocchus Press, a major small press publishing first English editions of Jarry, Adler, Apollinaire, Schwitters, Queneau amongst others as well as writing novels, poems, philosophical treaties, operas, painting and theatre design. They died in London in 1988.

The DVD contains the three surviving Themerson films (all others were lost in Nazi-occupied Poland) subtitled in English and Polish and is accompanied by a 86 page book of unpublished notes and correspondence by Stefan Themerson.