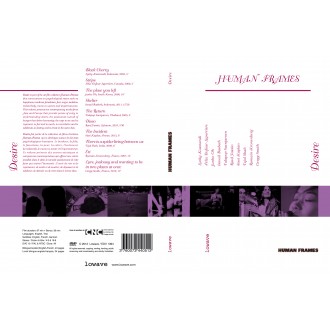 DVD with a collection of ten contemporary art works by various artists.

DESIRE is part of the art film collection Human Frames that concentrates on psychological states such as happiness, madness, fanaticism, fear, anger, isolation, melancholy, mono no aware and impermanence. This volume presents ten contemporary works from Asia and Europe that provide points of entry to understanding desire, the passionate tumult of hunger that drives humanity: the urge to see and to represent, to feel and to touch, to overwhelm and to sublimate, to destroy and to create in the same élan.

This DVD includes the following films: