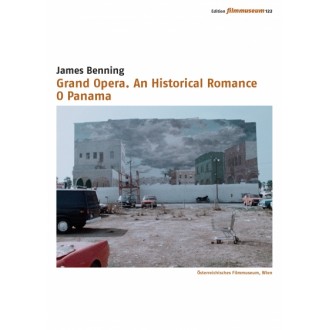 DVD with 2 films by James Benning

In James Benning's Grand Opera (1979) the static landscapes and cityscapes that made his name by the late 1970s are augmented with a number of experiments with established forms and conventions anda brief homage to four icons of the avant-garde: Hollis Frampton, George Landow, Yvonne Rainer, and Michael Snow. What distinguishes Grand Opera and sets it apart from Benning's previous work is thefilm's engagement with history both the filmmaker's personal biography as well as that of cinema. O Panama (1985) is Benning's only film based on fictional material (a collage of three short stories written by Burt Barr). The film resembles a sick man's (Willem Dafoe) fever dream, deftly blurring the lines between reality and fantasy.

Grand Opera. An Historical Romance (1979) comes across as strangely loose compared with James Benning's earlier works. Although he once again collects shots of recurring motifs: city views and landscapes, billboard walls, streets, industrial zones, gas containers, oil drilling rigs, traffic signs interrupted by short scenes, textual inserts, and experiments with film aesthetics, Benning leaves the strict structure of his earlier works behind. Just like One Way Boogie Woogie, made one year earlier, Grand Opera also consists entirely of static shots. But neither their duration nor their focal length ranging from long shots and close-ups to macro-shots provide cohesion. Benning describes his approach as »sampling without a script,« as a game played with the material. At first sight, the hybrid nature of Grand Opera seems untypical of his work, but upon closer examination, it reveals itself as a kind of comprehensive collage of aesthetic, formal and substantive questions central to Benning's films since the very beginning.

DVD features
Grand Opera. An Historical Romance 1979, 81'
O Panama 1985, 27'
20 pages booklet with an interview by Neil Young with James Benning and an essay by Barbara Pichler