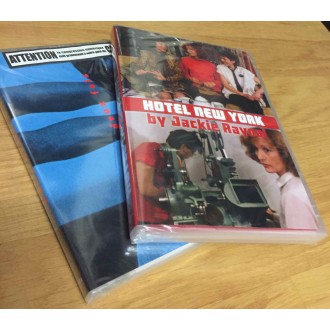 2 DVD pack with films by and featuring Jackie Raynal at a special promotional price.

DEUX FOIS
"This film is an intentionally elementary meditation on certain primary functions of film, that could be said to be at the roots of film editing as such - expecta-tions, exploring the picture, perceptual memory, relationships between on-screen and off-screen space - all explored in a series of free-standing sequence shots of perfect simplicity."
Noel Burch

"About thirty shots, with rarely a spoken word. But this wouldn't be worth mentioning if Deux Fois were not the film it is: one of the strongest (and I'm weighing my words in these times of verbal inflation) yet, at the same time, most enigmatic works ever seen. It took me three screenings over the course of several years to accept that I don't understand a thing about Deux Fois"
Louis Skorecki, Semaine des Cahiers

Contains a 40-page booklet about the film and the Zanzibar group by Claire Renier.

HOTEL NEW YORK
One day in New York, I took my linen to a small Chinese laundry. Then I forgot it for a few weeks. When I went back, the laundry wasn’t there anymore, the building had been demolished! I was haunted by the thought of my bedsheets gone forever with the laundry. This experience was the starting point for the New York Hotel script. I wanted to write and make this film to show how everything is transient over there. Things change all the time and are immediately replaced, much quicker than in Europe. The story stemmed from my own experience and impressions as a foreigner. It’s a comedy-drama.
-Jackie raynal, Libération

Raynal shows a New York... that usually never gets on the screen, and the storytelling is so swift, so pared down, and economical that Raynal can pack more into one hour than many filmmakers can into two.
-Filmex, LA Weekly