Friedl Kubelka vom Gröller - One Is Not Enough – Photography & Film 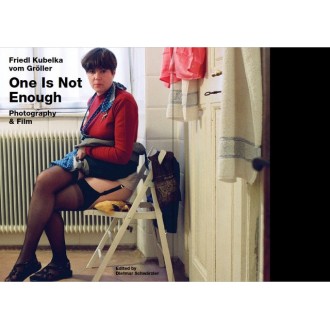 A monograph of one of Austria’s major photographers, filmmakers, and visual artists.

The heart of Friedl Kubelka’s photographic work (who as a filmmaker goes by the name of Friedl vom Gröller) is constituted by portraiture – whether she captures friends, acquaintances, family members, filmmakers, artists or simply clients, each for the most part gazing directly into the camera. Since 1972 to the present, Kubelka has also placed herself in front of the camera for her project Jahresportraits (Year’s Portraits) in which she mercilessly documents the process of aging. It has become the structural credo of Kubelka’s artistic practice to juxtapose the individual photograph with many other photographs.

The monograph focuses upon individual serial works as combined with contemporary portrait series showing e.g. artists from Senegal which are combined with others from Kubelka’s archive. So as to multiply perspectives, individual portraits are juxtaposed with others (double portraits), or more. As extras, a magazine about the Senegalese mural painter Pape Mamadou Samb aka Papisto Boy and a DVD with a selection of 19 films by vom Gröller are attached to the book.

DVD: Silence on the Screen
A selection of 19 films by Friedl vom Gröller