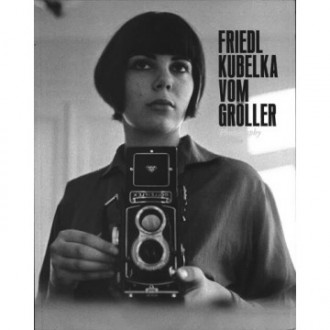 A book of the photography of Friedl Kubelka, which also includes a DVD of her 16mm films.

This publication offers a selective retrospective of the work of photographer and filmmaker Friedl Kubelka—known as a filmmaker under the name of Friedl vom Gröller. In addition to a selection of her fashion photographs, the book focuses on portraits of her friends and family, as well as series of images and films.

Kubelka started on her long-term project, "Year’s Portraits," in 1972: she photographed herself on a daily basis over a period of one year—a process that has been repeated every five years since. This conceptually-structured work on the subject of self-portraiture produces a complex picture of a woman’s search for her own identity by alternating exaggerated poses of female self-representation with documents of personal retreat. Through the choice of staging and props, minor adventures and personal experiences are hinted at; the individual photographs seem to link up to form a film running at a rate of one frame per day.

Among the artist’s portrait subjects are Franz West, Walter Pichler, Peter Kubelka, as well as central protagonists of the American Independent Cinema such as Jack Smith, Bruce Conner, Hollis Frampton, Kenneth Anger, Jonas Mekas, George and Mike Kuchar, and many more. Most of the images gathered together here are published for the first time in book form.

Friedl Kubelka was born in London in 1946 and lives in Vienna. She attended the Photography Department of the Graphic Instruction and Research Institute in Vienna from 1965 to 1969. After her diploma examination as an industrial photographer, she ran her own photography studio from 1971 to 1977. In 1977 she directed her first "class in artistic photography," and in 1990 founded her own "School of Artistic Photography" in Vienna.

The book is part of the series of artists' projects edited by Christoph Keller and is published with Index DVD Edition, Vienna.