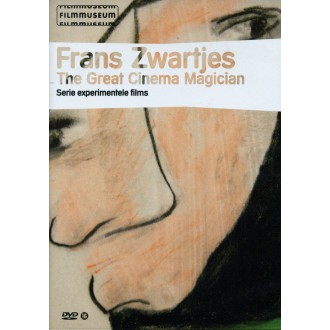 Collection of films by Frans Zwartjes.
OUT OF PRINT

Director Ruud Monster’s documentary ‘The Great Wizard’ portrays Zwartjes as a self-conscious artist who comments on the world in a farcical way. The film was partly shot at Zwartjes’s home, while he was composing.

Seats Two (1970). Two women, the director’s favourite actresses Moniek Toebosch and Trix Zwartjes are sitting next to each other. They are looking at a photograph of a mountainous area. It is clear that they are physically attracted to each other, but nothing happens…

Behind Your Walls (1970). Radio push buttons, a glass containing an effervescent tablet, an alarm clock, men and women in a room.

Living (1971) is the director’s favourite film. It is the climax of the ‘Home Sweet Home’ series, exploring his new house in The Hague. The film illustrates Zwartjes’s brilliant cinematography. He plays the main part while operating the hand-held camera. Two persons, the director and Trix, his wife, restlessly roam around the house. An extreme wide-angle lens (5.7) was used, causing a strong feeling of estrangement.

Audition (1973). Zwartjes made many films without dialogue or sound. The music can however be very important. Zwartjes composes it himself, sometimes together with his brother Rudolf and Lodewijk de Boer. Audition is a fine example of a Zwartjes film with an important soundtrack. It is a visual improvisation of cinematography and acting. There is hardly a ‘story line’. A man and a woman watch another woman singing, predominantly in exciting black and white images.

Bedsitters (1974). Zwartjes shot Bedsitters in the stair case of his then new and empty house in The Hague. A mysterious and complex atmosphere was created by filming crawling and creeping creatures with a hand-held camera. Even when Zwartjes films himself, the camera seems to float. The flow of the moving images and a strong wide-angle lens turn the house into a space unknown to logic.

Pentimento (1972). Ice cold blue dominates this film. In a large building scientists humiliatingly experiment on women. At the time there were heavy protests from feminist activists against Pentimento. Film screens were blotted, film copies were destroyed and a film projector was thrown out of a window.

Sorbet 3 (1968, silent). Sorbet 3 is one of the earliest films by Zwartjes. It is obvious that he admired the New American Cinema. The film focuses on an excited neurotic man in drag (Lodewijk de Boer), reaching for a milk shake and looking at what’s beside him on the couch.

Birds (1968) was edited in the camera (an old technique from silent cinema). A black and white film full of contrasts about a woman, a Japanese toy bird and their relation with the viewer.

Spectator (1970). Safely behind his camera the photographer cannot get enough of his model and her long eye lashes.

A Fan (1968, silent). A man in drag sits on a couch holding a fan. The wallpaper behind him is floral patterned. Although the man does little more than looking around and waving his fan, Zwartjes created enormous tension.

Anamnesis (1969). Film in three parts. A man and a woman, Trix Zwartjes and Lodewijk de Boer (Zwartjes’s regular actors) circle around each other in a house and outside at the water side. They attract and reject each other.

Spare Bedroom (1969). Internationally acclaimed film from the the Home Sweet Home series by Frans Zwartjes. Two saturnine people are involved in a claustrophobic game of attraction and rejection.