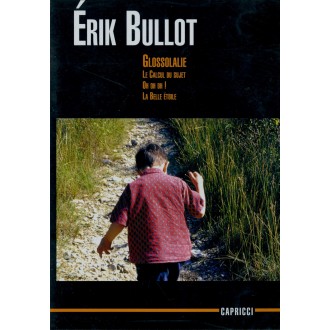 Three short films by Erik Bullot with a booklet.

Glossolalia digital video - 26min - 2005 Presented in November 2005 at the IRAM 02. Glossolalie is a filmed letter seeking an absent viewer. He lists so mischievous and paradoxical, language differences. To open the door to mediums, to talk backwards, to sing lullabies, to listen to radio stations of the world, to talk in several different languages, to solve a riddle, to manipulate a machine to count, to translate his own words into sign language, to write calligraphy, to sing in Esperanto, to pray in distinct languages, to improvise imaginary twittering, to ignore the ABCs are some of the actions covered in this curious encyclopedia.

This DVD comes with a 24-page booklet including a text by Émeric Lastens, "Lier le geste à la parole," an interview with Erik Bullot and the script of the film "Glossolalie."