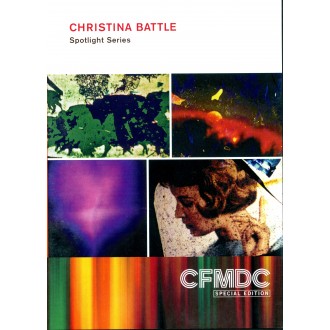 Christina Battle’s hand-processed, coloured and manipulated films explore the material and transformative possibilities of the film medium. Using techniques such as cameraless animation and collage, she “paints and sculpts” on film. Her work explores built and natural environments, history and the act of collective remembering, and a fascination with weather and storms.

1) hysteria (2006 35mm 4 min.)
An unstable community leads to accusations and panic. Re-considering the Salem witch trials of 1692. Then doesn't always seem so far off from now.

2) traveling thru with eyes closed tight (map #2 - january 03 thru january 06) (2006 35mm 4 min.)
a yellow field meets clear blue skies. a mist of water over bright green grass. a well worn sidewalk in grey and white. a lone black crow on a sandy beach. a lowering sun fades into the sea.

7) following the line of the web (2004 16mm 2.5 min.)
Creating an intricate visual map, photograms provide an opportunity to travel through the space of a spider’s web.

8) buffalo lifts (2004 16mm 3 min.)
Awash in sumptuous colour, a herd of buffalo desperately try to hold on as they struggle to cross the film frame.

9) paradise falls, new mexico (2004 16mm dual-projection 4min.)
“The desert wind from America’s Southwestern ghost towns blows through the film’s emulsion, stripping away the myth behind the imagery of shoot-outs, outlaws and the lone gunmen from Hollywood Westerns.” - Images Festival, Toronto, 2004

11) Cooper/Bridges Fight (2002 16mm 3 min. )
The anxieties and frustrations of McCarthy-era Hollywood are integrated into this reconstruction of an infamous scene from “High Noon.” The struggle between a sheriff and his deputy become one with the film’s emulsion.