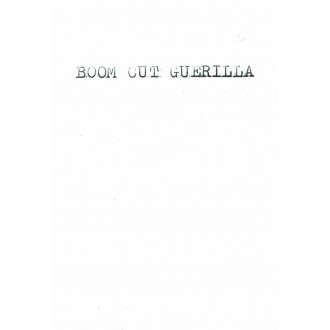 Catalog of the exhibition of moving images BOOM CUT GUERILLA, held at Tank art space in Marseille from 25 to 30 August 2016.

BOOM CUT GUERILLA brings together a selection of documentary essays on video art pieces and experimental films that have in common the reappropriation of images from film archives, pop culture and mass media.

Much like works from the Junk Art movement, the art of reusing industrial waste materials or domestic waste, this "cinema povera" (in the words of Craig Baldwin) places reappropriation at the center of experimentation in order to To question our critical, sometimes political, mind. This method of creation, inherited from the avant-gardes; By the collage of Dada, the diversion of Surrealism, but also the anti-establishmentist spirit of situationist art, according to which art must belong to the whole world, and the spectacle must be destroyed as an object of social relations; Has not lost its enthusiasm and appropriately depicts the image of our connected society. It is a matter of questioning, confronting, violating the idioms of spectacular society, defying sovereign visual legitimacy by defusing the signs, icons and other myths established in our collective cultural and social consciousness. To overthrow this authority to invent new images, to sublimate in order to create new realities. This work of sap whose humor and buffoonery delights usurps this world of images to better transform it.

BOOM CUT GUERILLA presents itself as a visual delirium, a comical dialectic in which these works summon the viewer's living gaze. From collage to diversion, from mixing to sampling, from sampling to re-use (remixing), the image is here tinkered with, mistreated, altered ... in order to reveal its singular plasticity through a taste for the deformed, heterogeneous mixture of the composite. Finally, this art of recombination questions the nature of our cultural relations, the moral value of identity, appropriates memory and history, moves fiction, but above all thinks of the image in a context in which the mercantile industry is Schizophrenic: on the one hand it favors and diffuses tools of free reproduction and the circulation of information, in other words it conceals its mercantile inclinations by advocating intellectual property laws.

It is from this perspective that BOOM CUT GUERILLA wishes to inscribe artistic action, in other words to expose "ecological" practices of the use of images so that they becoming a form of resistance against a cultural industrialization.