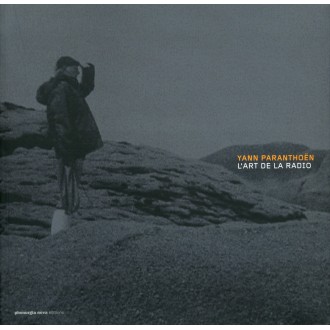 Yann Paranthoën? His name symbolizes the art radio (as they say cinema or art photography). He discovered a way to tell the world through sound, inventing a language and totally renewing the basics of radio broadcasting. In its broadcasts, speech is a material carving, as well as the life of sounds or silences. Similarly, for him, the voice is primarily a music before being meaningful. In both written desecrating the image, he changed the order of things and renewed our relationship with reality. Distancing himself from the "everyday radio," he readily compared his job to paint or to the size of granite as practiced his father extract of reality sound block, mount it as the stone size , as we polish the mix. Here is how he spoke: "I compare the radio with paint. For me, radio has more to do with the visual arts. I make a painting ... a sound picture, I divided the sounds as colors. "
His death in 2005 was seen as symbolically stating the fading of some form of "creation radio" in its most demanding form. That is why it was urgent to honor him, so that his work continue its route to new listeners, confirming them to prefer the conventional radio, the sovereign liberty of sound art.

States in this collective tribute, visual artists, writers and musicians reveal its influence on the creations of today - an influence that extends beyond the radio circles, because the work raises the dual issue of shape and sound the return of the real. They reflect his passion for sound.
Two unpublished interviews, one with Jack Vidal from 1990, the other (probably the last he granted) with Thomas Baumgartner dating from October 2004, deliver a reflection on the "size of the sounds."

A 50-minute CD gives to discover "Questionnaire for Lesconil," which in 1980 revealed him as an author with whom he would have to count. The show takes place on the time of day: departure of boats, sea fishing, fish auction ...
DVD 110 minutes together 2 films driven by the urgency to transmit the edge of his unique approach. - "Au Fil du his" Pilar Arcila is a portrait in 54 minutes Yann Paranthoën produced by Arabian films. "Check up the Nagra IV S 3328", is a journey filmed by Michel Follorou during a visit Nagra in Switzerland in 1993.

Christian Rosset coordinated the project. Composer and radio writer, he was a member of the CAB France Culture where he rubbed shoulders with long Yann Paranthoën. He is the author of an essay on Paranthoën appeared in the CD edition "Lulu" (INA / Phonurgia Nova, 1992). Claude Giovannetti, companion and assistant Yann Paranthoën developed chronology of emissions from 1967 to 2005, comparing its sources to those of INA compiled by Arnaud Touveron. Jean-Francois Pontefract digitized "Questionnaire for Lesconil." Christian Kirk Jensen designed the layout of the book. Marc Jacquin, Director of Phonurgia Nova, orchestrated everything.
The author thanks SCAM who helped the birth of this book. Phonurgia Nova thanks his loyal partner, INA, which authorized the reproduction gratis "Questionnaire for Lesconil" Yann Paranthoënn SACEM and who supported this publishing company.