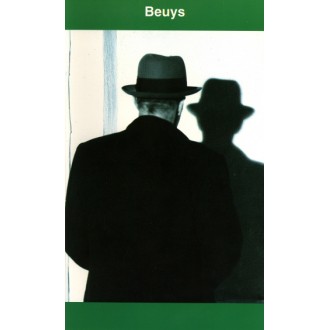 A film by Werner Nekes and Dore O.

The German artist Joseph Beuys is reflecting his art theory, being filmed as a kinetic sculpture.

"The term 'visual arts' that is prevailing in modernity is really a symptom for the reduction of perceptional categories within the human creativity as a whole.
An anthropological conception of art - and I have proved for instance in sculptural theory, that you hear a sculpture before you see it, consequently the auditive element is not just an equal part, but a constituent of the perception of plastic art - confronts you with the task of exploring the conception of creativity in all directions, of spreading it out and substantiating it anthropologically.
So for instance, the human creativity potential as a whole doesn't only comprise the recognition criteria in thought, but it also comprises the sensational categories in the middle of the soul, that is, the moving element, and it positively comprises the will potential in human will.
It is an interpretation of human creativity potential, beginning with the triple position, the connections of will, sense, and thought categories, which will get you to the more differentiated position of considering the perception, too, and thus the connection of human senses, discovering that for example seeing, the visual sense, the auditory sense, the static sense, the architectonic sense, the haptic sense, can be thought forward into the sense of will, the sense of thinking, and many other still to be developed senses." -Joseph Beuys
Exerpt of the film - text

The film has won the award for the best short- film of the German film - critics in 1981.

The artist Joseph Beuys talks about his concept of art – with his face turned to the wall and his back to the camera. A tribute to the artist at 60, radical in its simplicity and totally adequate to its subject.