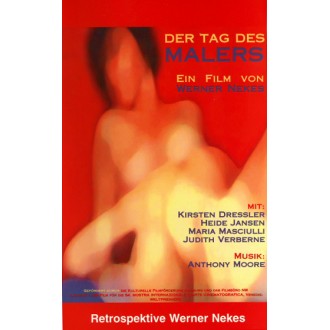 A film by Werner Nekes.

The painter gazes at his female model, or how voyeurism is transformed into culture. An erotic adventure film where the theme is the viewer himself.
"THE DAY OF THE PAINTER shows what "La Belle Noiseuse" does not want to show: the enclosed "Unknown Masterpiece". It is a walk through the picture world of the painter that directs the gaze to the unveiled female model. Associations with the picture world of Dürer, Marey, Matisse, Seurat, to the "Origin of the World" by Courbet, to "L' étant donnés" by Duchamp and to many other works of art can be called up and are actually intended. THE DAY OF THE PAINTER amalgamates the artistic expressive possibilities of painting, video and computer images as film. Unusual ways of showing make the film an adventure film for the viewer's gaze. The art of painting melts into the film." -Werner Nekes