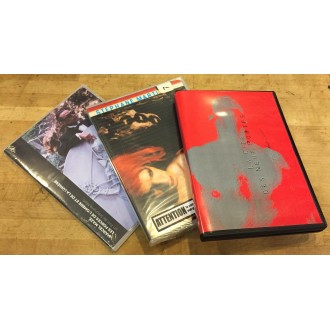 This pack includes 3 DVD releases with films by and about Stéphane Marti :

The mastery of Marti explodes in La Cité des Neuf Portes, where this young filmmaker constructs a rigorous work, coherent while variegated, rhythmical like a concerto, with “piani” and “andante”. In this case, a concerto for masculine bodies, often in makeup or travesty and Super-8 camera. Generally editing the film in the camera at the moment of filming, and playing on the lightness of his equipment with quasi-caresses or filmic coruscations, Marti thus reveals himself to be one of the masters of Super-8.
- Dominique Noguez

Images carried away by the dramatic and fiery musical flows of a sublime Mozart concerto, surprisingly synchronous. Images which are ingrained in the very singular velvety of the Super 8, this silver material with visible granulation and low field depth, whose subtle or jerky vibrations favor the exploration of bodies in close-ups. Aficionados (das) will note the presence of Michel Journiac's original works, that of a chiffon doll by Michel Nedjar, and will undoubtedly decipher a few winks at Huysmans, Von Gloeden, Kenneth Anger, the Diva Assoluta and Jean Genet's Chant d'amour, a favorite film of the Young Cinema Collective since the early 1970s. Elusive flutters that flutter around Marcel throughout this poem of love and death. Marcel's grace radiates in this tribute film as it touched all those who met him. An infinite gratitude to the one who devoted 40 years of his existence to bring out the impossible, forgotten or forbidden works of the shadow and a tender personal thought for the one who was an accomplice, a mirror and a double in the update of the vital energy of desires.
-Stéphane Marti, 08/2018

Stéphane Marti is a teacher and film-maker who, since 1976, has been expounding the plasticity of experimental cinema, freeing it from the dominant codes of narrative cinema. An avid defender of Super-8mm film (which he has been using for 30 years), he has fought for the acknowledgement of its excellence as a film-making tool. His work, which screens in festivals and at international events, has been the subject of numerous interviews and articles. Flamboyant, baroque and sensual, his work revolves primarily around the question of the body and the sacred.