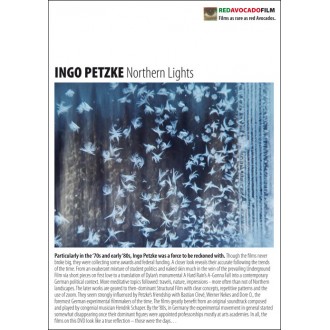 Particularly in the ’70s and early ’80s, Ingo Petzke was a force to reckon with. This was mostly due to his effervescent, encompassing activities in the arena of experimental film: writing and teaching, starting art house cinemas and even festivals, sitting on juries and boards, running CINE PRO – Germany’s only distribution company specialised in experimental film – and even funding cash prices for budding film makers. Last but not least he was a filmmaker in his own right.

Though the films never broke quite as big, they were released in a steady, reliable stream, collecting some awards and federal funding. A closer look reveals their accurately following the trends of the time. Where Opus RUB was an exuberant mixture of student politics and naked skin much in the vein of the prevailing Underground Film, the Romance d’Amour trilogy was just that – short pieces on first love. Once Upon a Time…? aims at translating Dylan’s A Hard Rain’s A-Gonna Fall into a contemporary German political context. Winterfarbe II and Atlantis are the last films accompanied by a soundtrack of popular music, even if they already breach into the field of more meditative sounds. Still, they take up the topic that would dominate the next years: travels, nature, impressions – more often than not of Northern landscape.

These later works are less meditative than geared to then-dominant Structural Film with clear concepts, repetitive patterns and the use of zoom. Also, they are obviously influenced by Petzke’s close friendship with Bastian Clevé, Werner Nekes and Dore O., the foremost German experimental filmmakers of the time. All these films from ’75 till ’80 greatly benefit from an original soundtrack composed and played by congenial musician Hendrik Schaper. Schaper and Petzke would sit down and have a close look at the ‘script’ which would exist on millimetre paper or would be any other graph. Schaper would then come up with his musical ‘translation’ of the concept, often inroads into Minimal Music.

By the ‘80s, inspiration seems to have fizzled out. This may be because Petzke started a full-time professorial career. But it may well have been because in Germany the experimental movement in general started somewhat disappearing once their dominant figures were appointed professors mostly at arts academies.

In all, the films on this compilation look like a true reflection – those were the days…