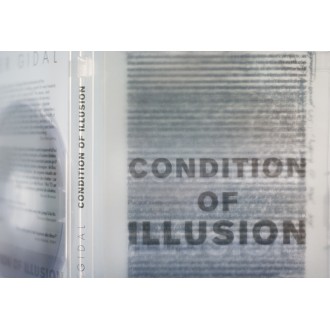 Special edition DVD with 11 films by Peter Gidal.  Please choose the language of the text you prefer for the booklet.

The DVD brings together 11 films by Peter Gidal made between 1967 to 2013. It is accompanied by a unique 40 page booklet of texts about the filmmaker’s work by Patricia L. Boyd, Stephen Heath and Chris Kennedy. The booklet is composed of transparent pages and was designed by Diana Vidrascu at RE:VOIR.

It’s upside down, inside out, negative, reversed — as though Gidal had cranked all the navigational tools of his medium to their absolute zero, and, in so doing, groped his way towards a spot that’s not on any map, some true, magnetic north of cinema itself. The viewer, held in this liminal space, this threshold, is by turns (or simultaneously) mesmerised, disoriented, captivated, frustrated and delighted. And we’re not just talking about cinema here: Upside Down Feature is awash with radios performing Cage-like trawls across their dials; with typewriters; static cameras; even Man Ray’s photos of the dust on Duchamp’s Large Glass. The leitmotif of clocks (their faces, naturally, flipped) is fitting: what we’re ultimately witnessing, perhaps, is a countdown, taking place on the far side of the screen, of all screens; the exhilarating spectacle of not just a medium but media tout court in a state of immanence, of almost-becoming.