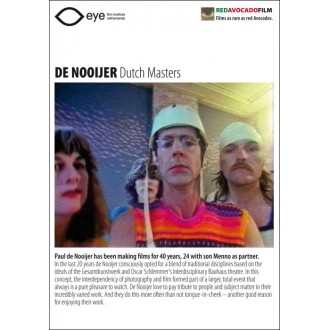 Paul de Nooijer (* 1943) has been making films for 40 years now – an incredible achievement in a field not exactly showered by public interest and funding. His reputation is solidly based on works displaying mostly ‘illusionism’ – the interdependency of film and photography. Since son Menno (*1967) joined in this ‘family business of art’ as a full-fledged partner in 1989, the films became faster and more colourful. But more importantly, the focus of their artistic efforts slightly shifted from just photography and film to a combination with theatre and performance. De Nooijer consciously opted for a blend of traditional disciplines based on the ideals of the Gesamtkunstwerk and Oscar Schlemmer’s interdisciplinary Bauhaus theatre. In this concept photography and film formed part of a larger, total event.

De Nooijer love to pay tribute in their incredibly varied work. And they do this more often than not tongue-in-cheek. Tribute to prominent works of art history – directly (like in Birth to Michelangelo) or slightly more hidden (like in Touring Holland by Bicycle to van Gogh). Tribute to pieces of Popular Culture (Tarzan & Jane) or tribute to traditional culture (Stripshow 1850). Tribute to other film makers (e.g. Frans Zwartjes by stressing pixilation in black& white and artificially recreating time-flow) or tribute to the essence of the photographic process (I Should See; A Fortified City). Yet they always remained true to their own art as the sad but likewise funny episode with Bill Gates exposes.

De Nooijer have consistently probed the visual possibilities of the photographic medium – analogue and digital – in relation to film, theatre and visual art in general. The results are always a pleasure to watch. This compilation aims to provide just this.

Titles included in the DVD (in running order):

The titles for this compilation were chosen by Paul. It compliments the DVD available from Moskwood. Thanks to EYE Film Institute Netherlands for their invaluable help and generous assistance by supplying files from their archive.

In addition to the running time of 72 mins of original work, the DVD contains the following documentary-type bonus material: