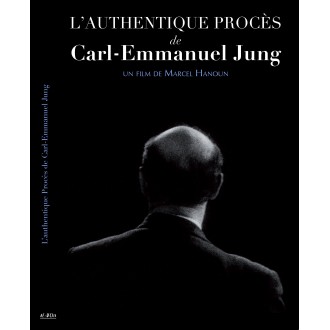 A rigorous and mathematic film, L’Authentique Procès, in the black and white shadows of the filmstrip, rejects all spectacular effects. Hanoun evokes however, through an austere deconstruction of film language, the Nazi horror with uncommon power. Imagination and words replace pictorial references. The death camps take form in our memory, reactivated, while the torturer – outlined with an entomologist’s precision – leaves behind the context of Hitler in order to reveal the monster hidden in each of us.
-TÉLÉRAMA

The traditional codes of dramatisation, the “intrigues” of fiction never become tangled in dramaturgy. Here, the symphony of abjection takes form, visually, from the soundtrack… Shifting the outlines of reality, the director carries out a synthesis of the organic and of the sensitive, of the audio-visual and of the “theoretical” in an approach giving full expression to the term political.
-RAPHAËL BASSAN, ÉCRAN

L’Authentique Procès de Carl-Emmanuel Jung is a physical work. The spectator not only feels it but can almost touch it.
-LEONARDO DE LA FUENTE, TÉLÉ-CINÉ

Hanoun is the cinematic repercussion of Flaubert and Mallarmé.
-FRANCOIS JOST