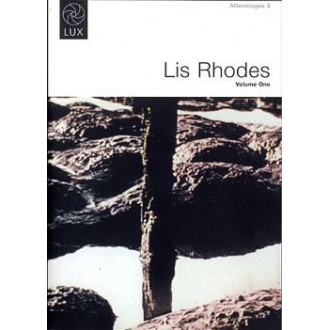 Volume 1 of the AFTERIMAGES DVD series from LUX featuring 3 films by Lis Rhodes.

Lis Rhodes has been at the forefront of British experimental filmmaking since the early 1970s. She studied at the North East London Polytechnic and the Royal College of Art. A strong formal aesthetic has been developed in her films, reflecting her involvement with the debates and practice which emerged from the London Filmmakers' Co-operative, where she was Cinema Curator 1975-6. Early 'expanded' works such as Light Music (1975) fused performance and multi-screen projection with an exploration of the visual qualities of sound. Her analysis of broader political and social questions can be traced to her later films, which combine formal rigour with a passionate critique of issues from nuclear power to domestic violence. As an active campaigner for women's rights, Rhodes was a founder member of Circles, the first women's artist film and video (1979) and was an Arts Advisor to the Greater London Council between 1982 and 1985. She lives and works in London and teaches at Slade School of Fine Art, University College, London.

The bloodstained bed suggest a crime..No answers are given, after the torrrent of words at the beginning of the film, all the film offers are closed images and more questions..Is it even blood on the bed, what fracture is there between seeing and certainty? If there has been a crime, 'she' might still be victim..How can a crime of such complexity and continuity be 'solved'? The voice searches for clues, sifting through them, reading and re-reading until the words and letters loom up nightmarishly, no longer hung on the structure of language. Felicity Sparrow, Her Image Fades as her Voice Rises, Arts Council of Breat Britain 1983

In Lis Rhodes' closely textured work, pictures and meanings are experimented with, brought richly together or pared down to abstraction in order to challenge and re-create. She shows us how the apparent inevitability of 'the natural' and immutability of 'the normal' are held neatly in place by those to whom such an order is of advantage. Pictures on Pink Paper is - women talking, thinking aloud and questioning this order; a critique of past experiences and ways of thinking, interwoven with the images and sounds from places remembered. There are numerous threads and layers, of possibilities and contradictions, as the film moves between what is heard and what might be spoken; was known and is now seen. Circles Distribution Catalogue 1987

Shows the surveillance of a woman by overseers who have judged her to be mad. What is most provocative about this film is that it proposes multiple credible points of view even as the woman is being certified insane by the Censors. We voyage into the skull of a woman and peer out to a monumentally static cold waste with planetary slow motion. It is the bunker-eye view. Sandra Lahire, Undercut, Autumn 1990.