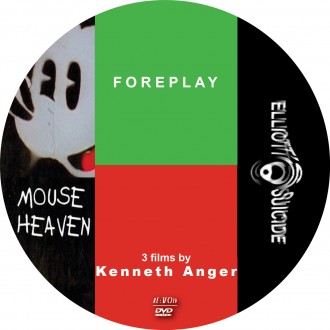 This DVD is printed and assembled on demand

"Mouse Heaven is twelve minutes of footage of mostly worn out, distressed, depression-era Mickey Mouse paraphernalia; long shots of hundreds of sorry looking Mickeys, old, wooden Mickeys, scary puppet Mickeys, Mickeys against dark red, ominous looking backgrounds, Mickeys behind storefront windows, against bright purple screens, dancing and spinning on platforms to James and Bobby Purify’s “I’m Your Puppet” (1966). It’s mouse overkill, and a comment on the power of the Disney brand, or any brand, and the dolls march like soldiers in symmetrical patterns. The vast numbers of mice spinning about the screen produces an overpowering, somewhat nauseating effect: the strangest image is an ancient set of carved wooden Mickeys playing guitars, and the most pleasing: a golden Mickey statue rotating in the center of the screen blasted in light."

"Leave it to Kenneth Anger to turn footage of a very non-professional men’s soccer team warming up for practice into a sweaty, sexy, homoerotic seven minutes. Rarely does an entire figure appear in Foreplay, but rather snippets of sweaty, twitching muscles, well-endowed groins, and sculpted calves kicking balls, producing flesh-slapping sound effects to a score of techno music. Initially Foreplay looks like a crappy home video of soccer practice, but it’s also reminiscent of Anger’s pop/fetish films Scorpio Rising (1963) and Kustom Kar Kommandos (1965)."

"A homage to the late American singer-songwriter Elliott Smith, Elliott’s Suicide is a sentimental 15 minute tribute, lacking Anger’s usual irony for obvious reasons. The film begins with shots of friends’ and fans’ last words written on Smith’s memorial on Sunset Boulevard, then to footage of a Macy’s parade, focusing closely on the oddly outfitted participants, some in renaissance attire, cowboys with lassos, and beauty queens. The film is scored with Smith’s music, resulting in a melancholy effect, especially in the segment that follows Smith through the woods and films him as he digs up a guitar, then plays a song. This footage is repeated in the end of the film, but in a negative reversal print, suggesting pretty damn clearly that the subject matter has moved beyond the veil."