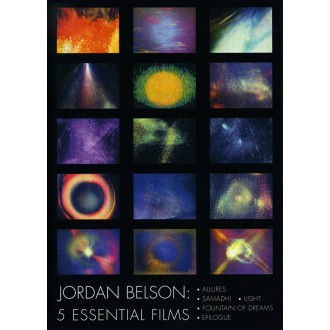 For distribution solely in Europe.  Customers in Asia, Australia and North and South America, you can order this DVD by following this link: ORDER THIS DVD FROM CVM HERE

Allures (1961) "I think of Allures as a combination of molecular structures and astronomical events mixed with subconscious and subjective phenomena - all happening simultaneously. The beginning is almost purely sensual, the end perhaps totally non-material. It seems to move from matter to spirit in some way." "...it took a year and a half to make, pieced together in thousands of different ways.... Allures actually developed out of images I was working with in the Vortex Concerts." (Jordan Belson, quoted in Expanded Cinema by Gene Youngblood, pp. 160-162). The soundtrack is a collaboration with Henry Jacobs. Allures was preserved with the support of the National Film Preservation Foundation.

Samadhi (1967) evokes the ecstatic state achieved by the meditator where individual consciousness merges with the Universal. "I hoped that somehow the film could actually provide a taste of what the real experience of samadhi might be like." (from Scott MacDonald's interview with Belson in A Critical Cinema 3). Belson adds "It is primarily an abstract cinematic work of art inspired by Yoga and Buddhism. Not a description or explanation of Samadhi."

Light (1973) is based on the continuity of the electromagnetic spectrum. It is a ride through space and light. This is the last film for which Belson composed his own soundtrack. This film was preserved with the support of the National Film Preservation Foundation.

Fountain of Dreams (1984) - never before released. A bold synchronization to the Transcendental music of Franz Liszt.

Epilogue (2005). By way of a pure Visual Music experience, the Hirshhorn Museum (Smithsonian Institution) commissioned a major new work from abstract film artist Jordan Belson, who distilled 60 years of visionary sound and images into a twelve minute videofilm, synchronized to a symphonic tone poem "Isle of the Dead" by the great lyric composer Sergei Rachmaninoff. Produced by Center for Visual Music, with support from the NASA Art Program. Epilogue was installed in the Visual Music exhibition at the Hirshhorn, Washington, D.C., June - September, 2005.